Breaking News: So I Made a Malt Tonic…

Rising high out of the landscape of Ludlow in England is the tower of Saint Laurence’s Church. Founded in the eleventh century by the recently arrived Normans, it has been rebuilt and added to several times in the past millennium.

Here among the vaulted ceilings and beautiful stained glass work are 28 misericords dating from 1425 and 1447. From the Latin misericordia meaning pity, loving-kindness, or compassion, these misericords are hinged chairs, or ‘mercy seats’, and are supposed to aid in support of a person long at prayer.

And while the sheer amount of these found at Ludlow is striking for a church of this size, what is remarkable for us is the intricate depictions carved into the underside of the seat.

In particular, one of the misericords features an otherwise naked alewife with an elaborate horned headdress brandishing an ale mug, dragged off to hell while being serenaded to the dulcet tones of a bagpipe-wielding demon. 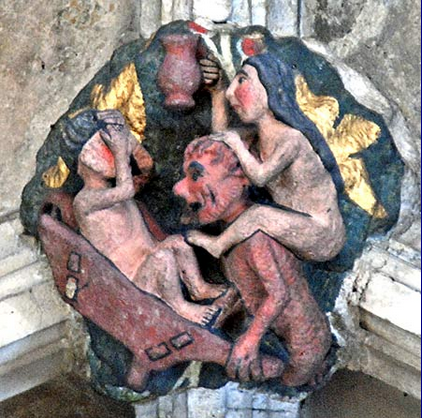 But the depiction here in Ludlow is not a single event. Indeed, Norwich Cathedral is host to another naked alewife apparently happily perched atop a wheel-barrow toting demon intent upon carrying more souls off to hell in his cart. The alewife was often an artistic subject utilized in Doom or Last Judgment paintings in England, including Holy Trinity Church in Coventry England, a wall painting at St. Edmunds, and one at St. Thomas Beckett Church in Salisbury.

They are generally carved and painted in a similar manner: naked with elaborate headdresses holding a tankard of ale and Miriam Gill, an expert in medieval wall paintings and art, contended that this design made it quite clear the sins of the alewife. They were portrayed as liars and thieves who sold their ale in false measures, they were lustful creatures as seen in their nudity, and their very trade itself inspired the deadly sin of gluttony.

Indeed, Michelle M. Sauer argued that ‘alewives became the extreme version of the potential failing all women had, providing justification for barring women from both brewing and taverns altogether’. In short, alewives became a lightening rod for a general misogynistic ideology that became increasingly prevalent in the Middle Ages.

To be clear, not all depictions of alewives in art were negative: there are portrayals of charitable alewives at Trotton and Hardwick, exchanging ale for money, or a mural in Ruaban, Clwyd, Wales, where a woman offers a man a covered mug of beer, as per the legal doctrine of making sure the portions of ale were of standard size- more on this in later post. There was a distinction how rural society viewed alewives in England versus those of urban areas where competition was more intense and larger scale brewing was common much earlier, as argued by scholars like Theresa Vaughan. This is possibly reflected in these divergent depictions.

However, by and large the ideas of alewives seem hostile. And these highly negative conceptions were not only present in paintings and carvings, no, narrative tales and stories from the literati were also littered with disparaging accounts of alewives. Especially of those alewives being carted off to hell to pay for their sinfulness in life.

Stayed tuned for the next installment in this series on alewives and literary depictions.

Katherine L. French, The Good Woman of the Parish: Gender and Religion After the Black Death, (Philadelphia, 2008).

Miriam Gill, ‘Female Piety and Impiety: Selected Images of Women and Their Reception in Wall Paintings in ENgland After 1300′ in Samantha J.E. Riches and Sarah Salih (eds.) Gender and Holiness: Men, Women, and Saints in Late Medieval Europe (London, 2002), pp. 101-120.